A Brief History of the TTOS New Mexico Division (NMD)

The TTOS New Mexico Division officially came into existence in 1986, but the story actually starts a year earlier. It was a cold and windy day… no kidding! Back in 1985, a group of Albuquerque toy train operators, led by a new New Mexican, Mike M., tried to have a swap meet. Since nothing in New Mexico has to be “formal”, one of those operators, Ernie N., offered to have the swap meet in the parking lot of his restaurant, “The Quarters”. Those first attendees were something new. In New Mexico, scale model railroad clubs were numerous, but these toy train operators were a new breed as far as being an organized group. 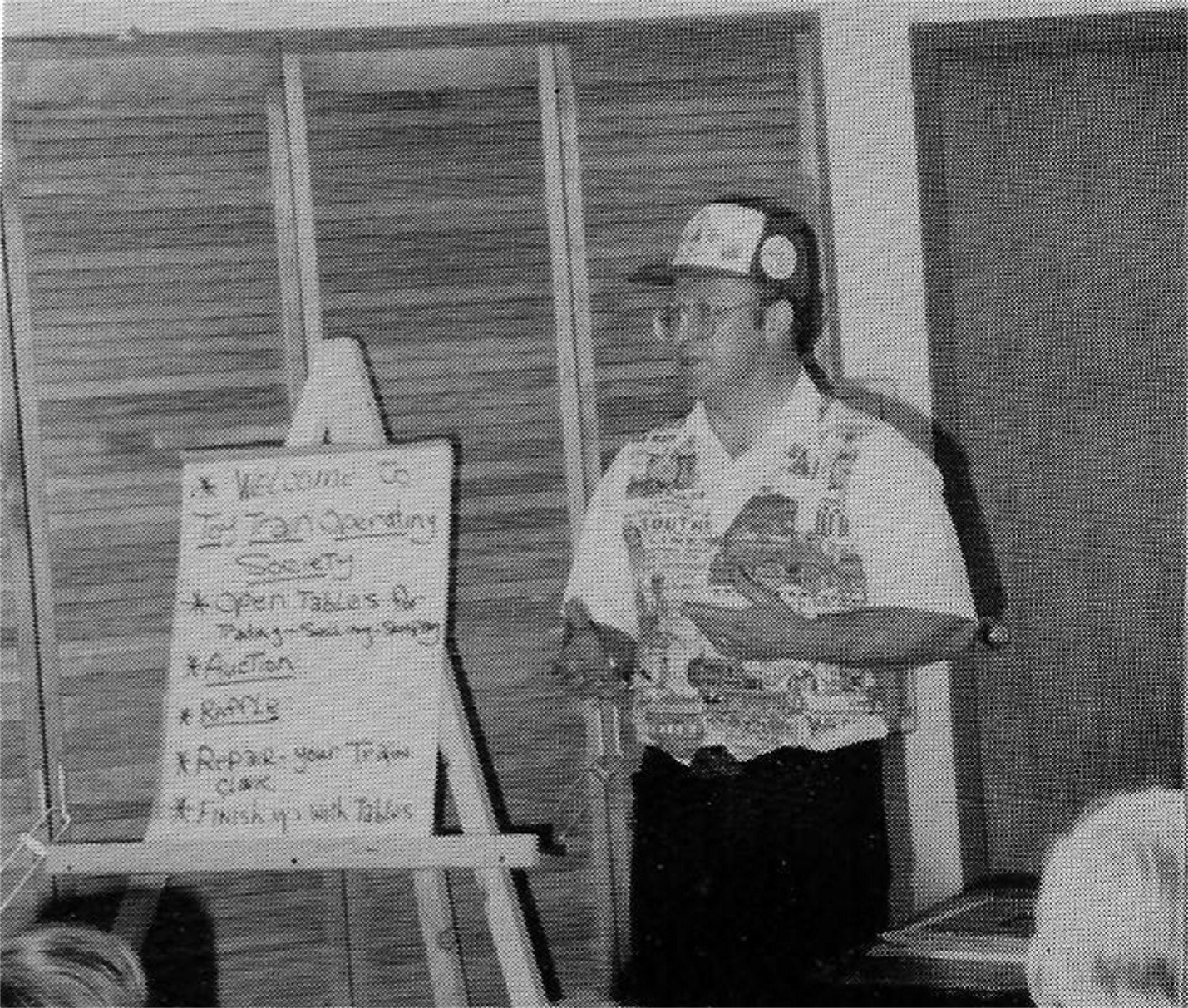 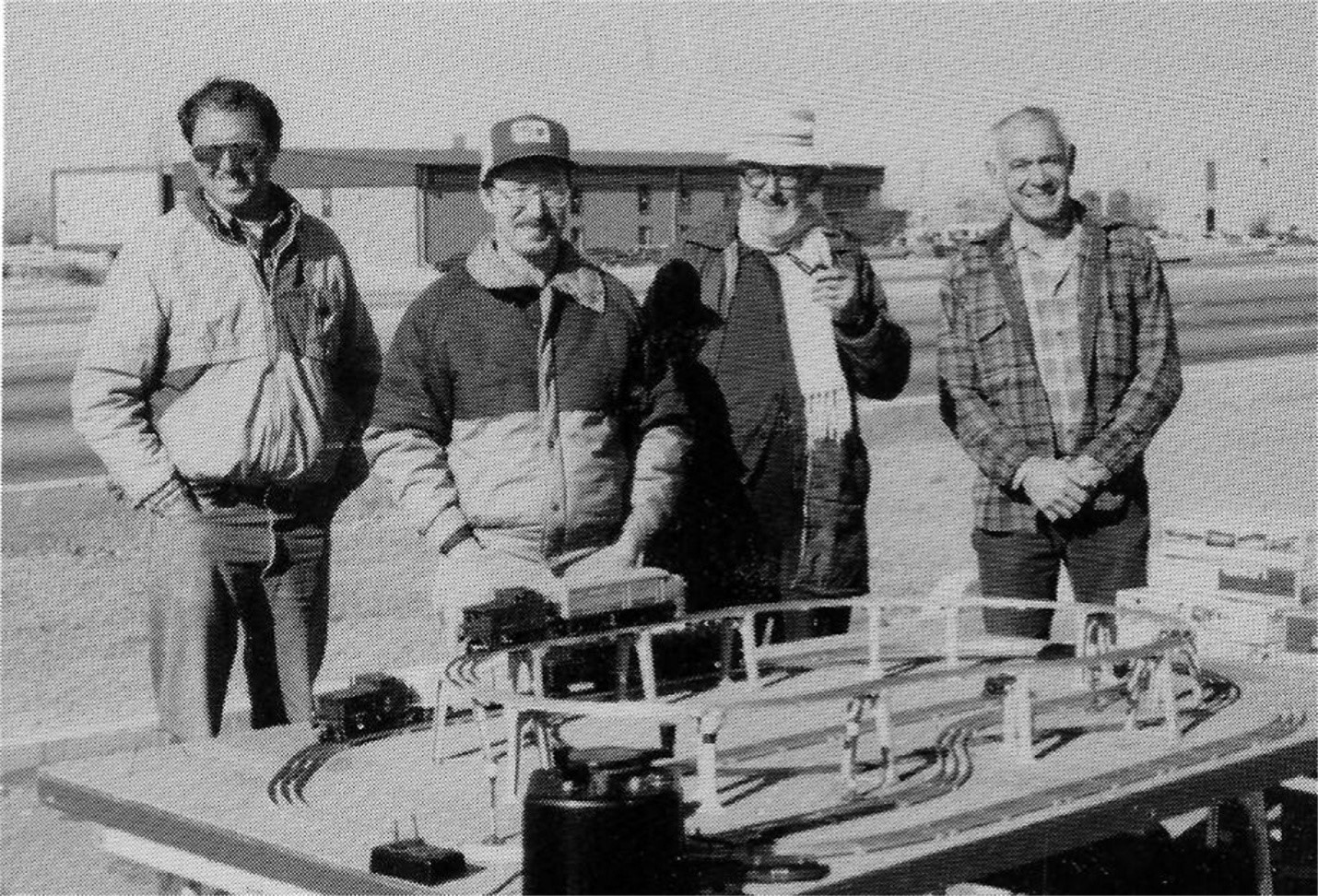 Mike M. was a veteran of the southern California TTOS mob. When he was transferred to New Mexico with Delta Airlines, he was quite dismayed to find out that there were no weekly (or monthly) swap meets and there wasn’t even an organized group of toy train operators. With little delay, he took the bull by the horns and started to hit whatever venues he could to get the names of other toy train operators in town. From that effort, the TTOS NMD charter members started to come together. With a group of about 15, Mike started the process of getting a TTOS charter for New Mexico as a stand-alone division. This was granted in November 1986.

During the first few years under Mike’s leadership as President, the NMD held four meets annually at a community center near the middle of the city. There were about 15 vendors at each meet along with a raffle and auction. As word got out around town, toy trains and toy train operators started coming out of the wood work. Trains that hadn’t seen the light of day in about 20 years came to the meets to be sold, auctioned, or repaired. The NMD quickly grew and by 1988 there were over 40 members. Also, as some more knowledgeable members joined the NMD, the meets featured repair clinics and layout building demonstrations. 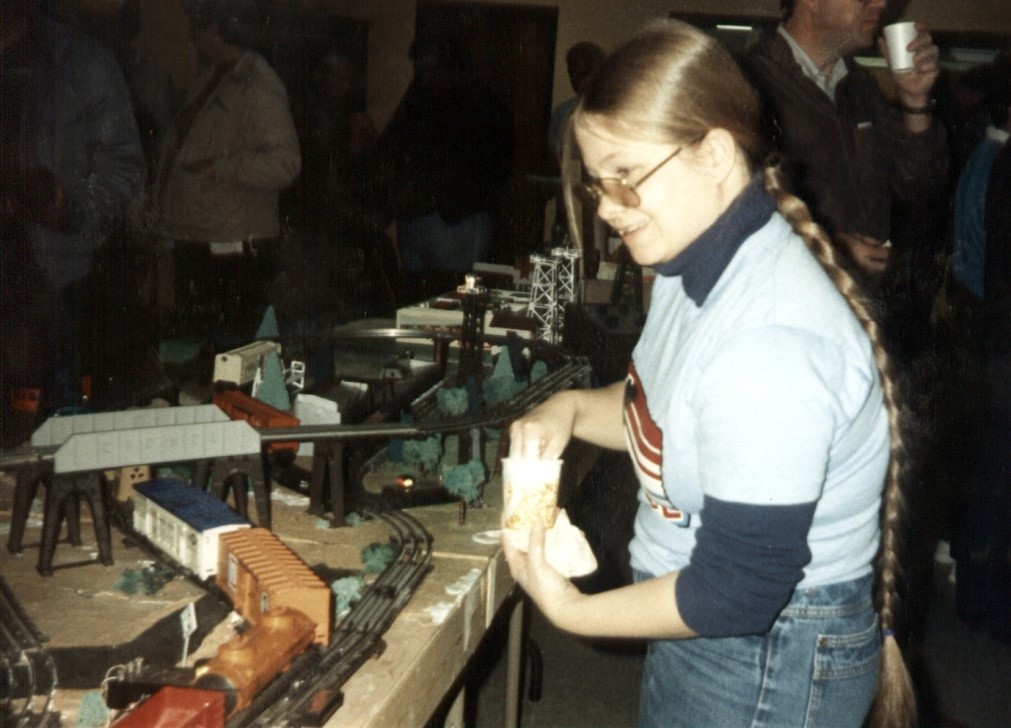 Mike M. was quite motivated and during those early years he and some of the members managed to find the time, materials, and a location for the NMD Museum. This was a 10’ x 20’ enclosed display that was housed at the Classic Century Square Antique Mall on Central Avenue. Tony P. was also very motivated to do work and started producing a television show about toy trains for the local cable access station. “Our Old Trains” ran from 1988 to 1993 and featured local layouts and collections, and building tips of all kinds. 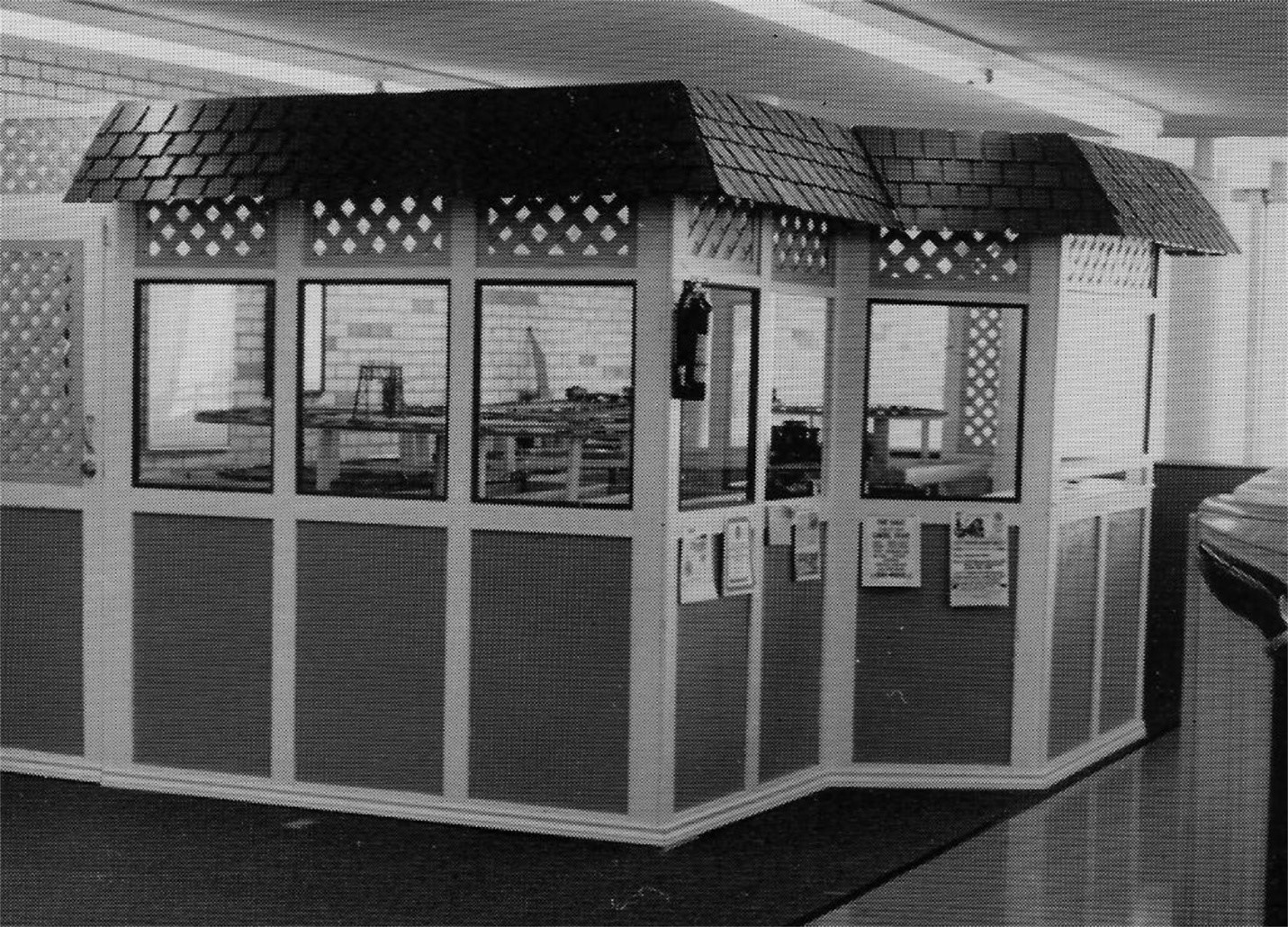 THE NMD MUSEUM AT THE CLASSIC CENTURY SQUARE.

The first big change in the way thing were run happened in 1989 when the meets were moved to the Best Western Rio Grande Inn. Also, a full mailing list was started to inform members and guests about the swap meets. And to add to the growth of the NMD, Roger A. became the first member to build modules using the new Tinplate Trackers standard. Another big change in 1990 was the NMD’s first change of command – Tony P. was chosen as the division’s second President. He also started the NMD’s newsletter, the “Fixed Voltage”. Finally, the year closed out with a swap meet at Jefferson Middle School where Tim W., another NMD charter member, was Principal. 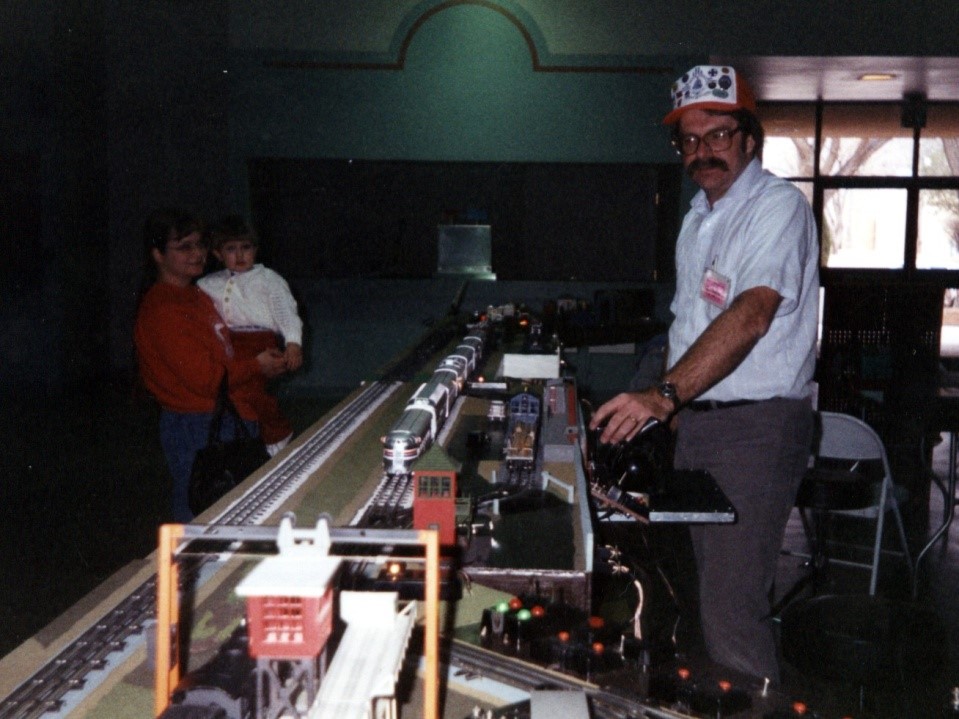 From 1991 to 1995 things settled down to a nice routine. The museum was rebuilt and rewired in 1991 and Bruce C. became the newsletter editor at the end of 1992. In 1993, Tom L. took the reigns as President with the NMD going strong with 59 members. Swap meets were held in Las Cruces, Roswell, and Santa Fe. The meets in Albuquerque were moved to the Holiday Inn Pyramid in 1993, then to the Albuquerque Airport in 1994. Tinplate Trackers appeared at the Great American Train Show and public venues like the Winrock Mall. Starting in 1994 the NMD started supporting the Christmas show at the Carrie Tingley Children’s Hospital.

In 1996 the NMD had its biggest event to date – the hosting of the TTOS National Convention in August. The convention was a great success for the NMD and the Convention Car, one of Lionel “6464” box cars, carried the New Mexico Central road name (“Connoisseurs of Red and Green Chile”). The car also featured the NM Central’s mascot, El Chilito. After the Convention, Tom L. retired and Bill M. took over as President of the division. 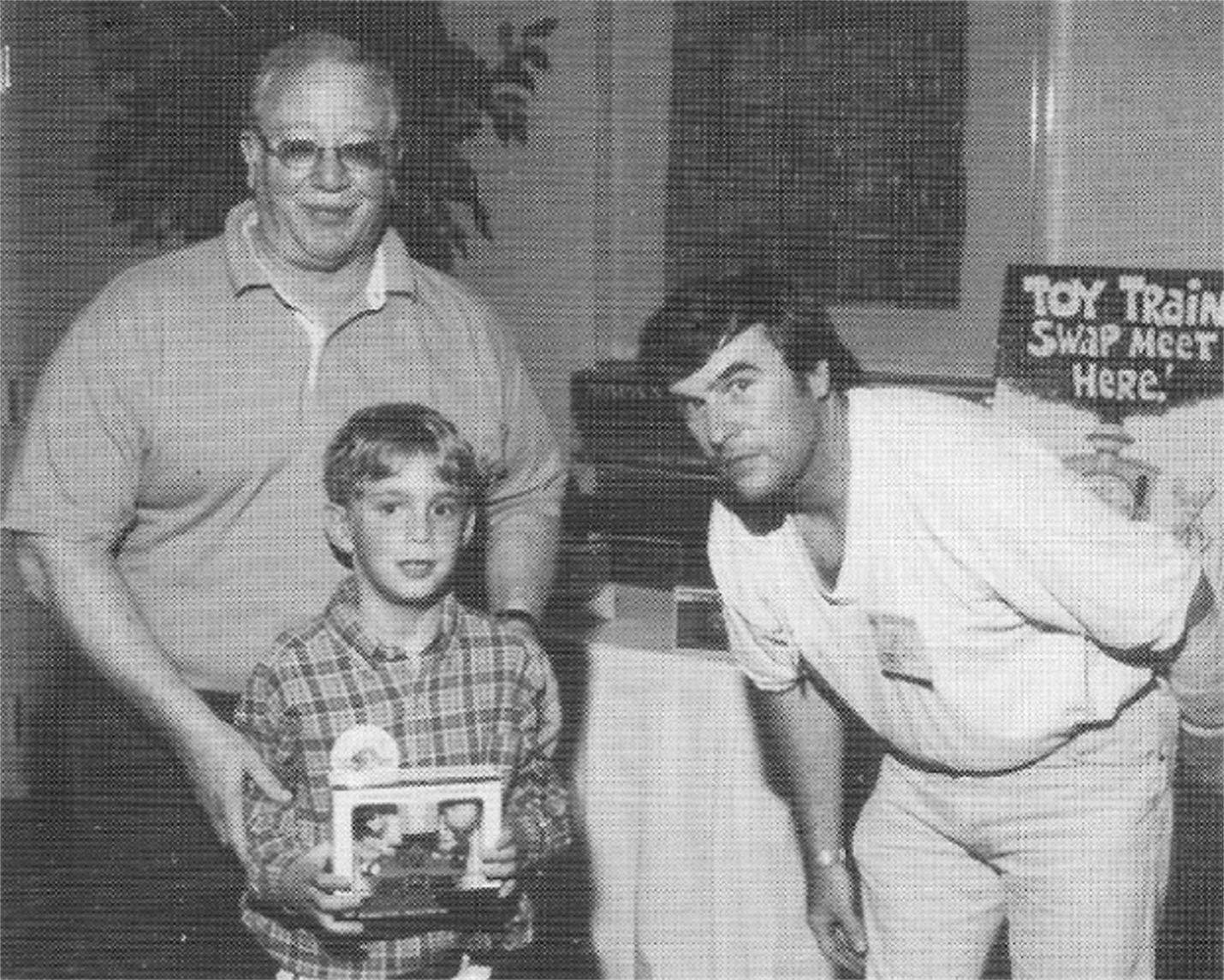 JERRY P. AND TOM L. AT THE 1996 TTOS NATIONAL CONVENTION IN ALBUQUERQUE.

The NMD grew and changed during the rest of the 1990s and 2000s along with the hobby in general. Members like Tony P. and Art L. led the way to bring everyone into the world of TMCC and remote control. Other members like Jim S. and Greg P. kept many members’ Prewar and Postwar equipment running in prefect order. Good and bad stories about getting parts from the relocated Madison Hardware stock were rampant at every meeting. And of course, we all started worrying about that awful word, “demographics”. Although we did our best to keep the trains out in public with our swap meets and module displays, the club was getting older and younger members just weren’t showing up. However, this didn’t stop the NMD from remaining active in the community as we continued to support the Carrie Tingley Children’s Hospital and other groups. 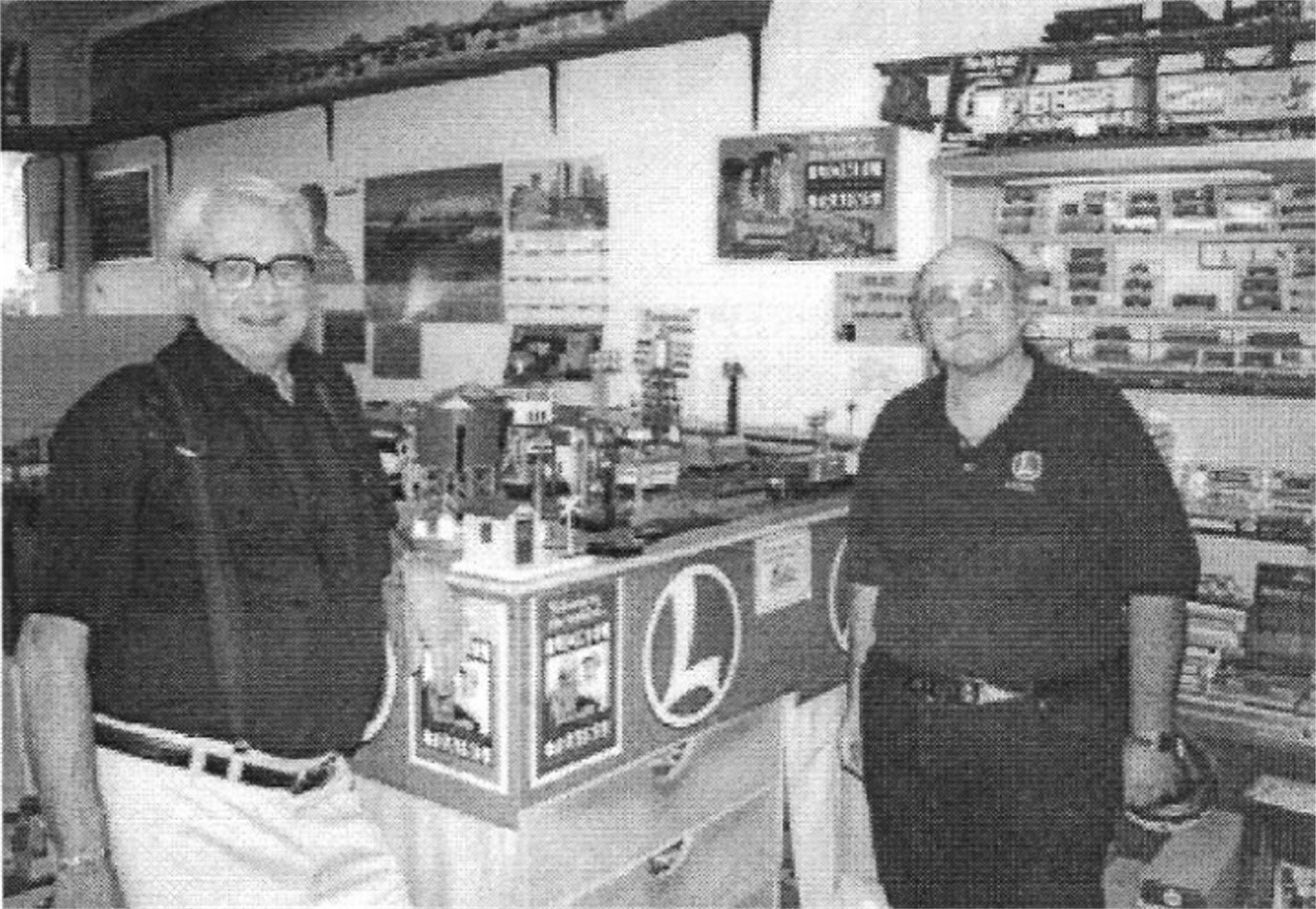 WARREN H. AND GREGG P. AT THE NEW LOCATION OF THE TRAINS WEST HOBBY SHOP.

In 2001, Sam L. took over as President as the Division entered the internet age. Our newsletter was finally coming from a word processor and color photos were starting to show up. Unfortunately, 2001 was the year we lost our first charter member when Jim D. passed away. But the Division kept going as Greg P. took over as President in 2004. As the decade continued, people came and went, but the NMD held steady with about 60 members. The swap meets continued, clinics and picnics were welcomed events, and the modules were out about every other month to keep toy trains in the public eye. 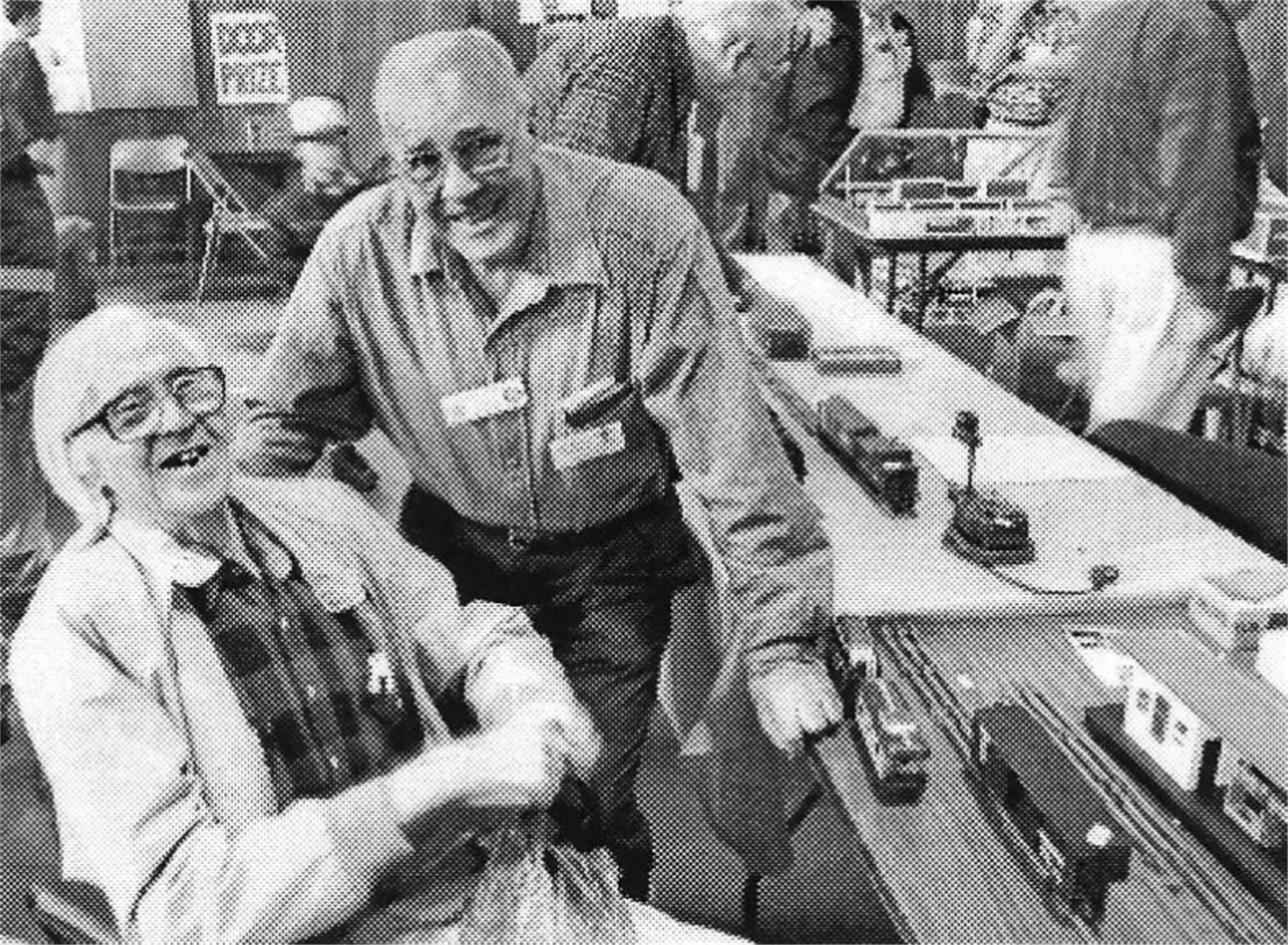 In 2006, John H. became President and the division took on another major project. Member Ed B. asked for volunteers to build a layout for the Make-a-Wish Foundation. Several members stepped up and spent about four months designing and building a layout for a local boy who was in a wheelchair and had very little use of his arms and hands. The control system of the layout consisted of a series of large push-button switches (similar to Lionel’s Big Red Switch) that would make the train stop and go, throw turnouts, and operate accessories. The layout was set up in the boy’s home during August and the whole city quickly found out what TTOS NMD toy train operators could do. 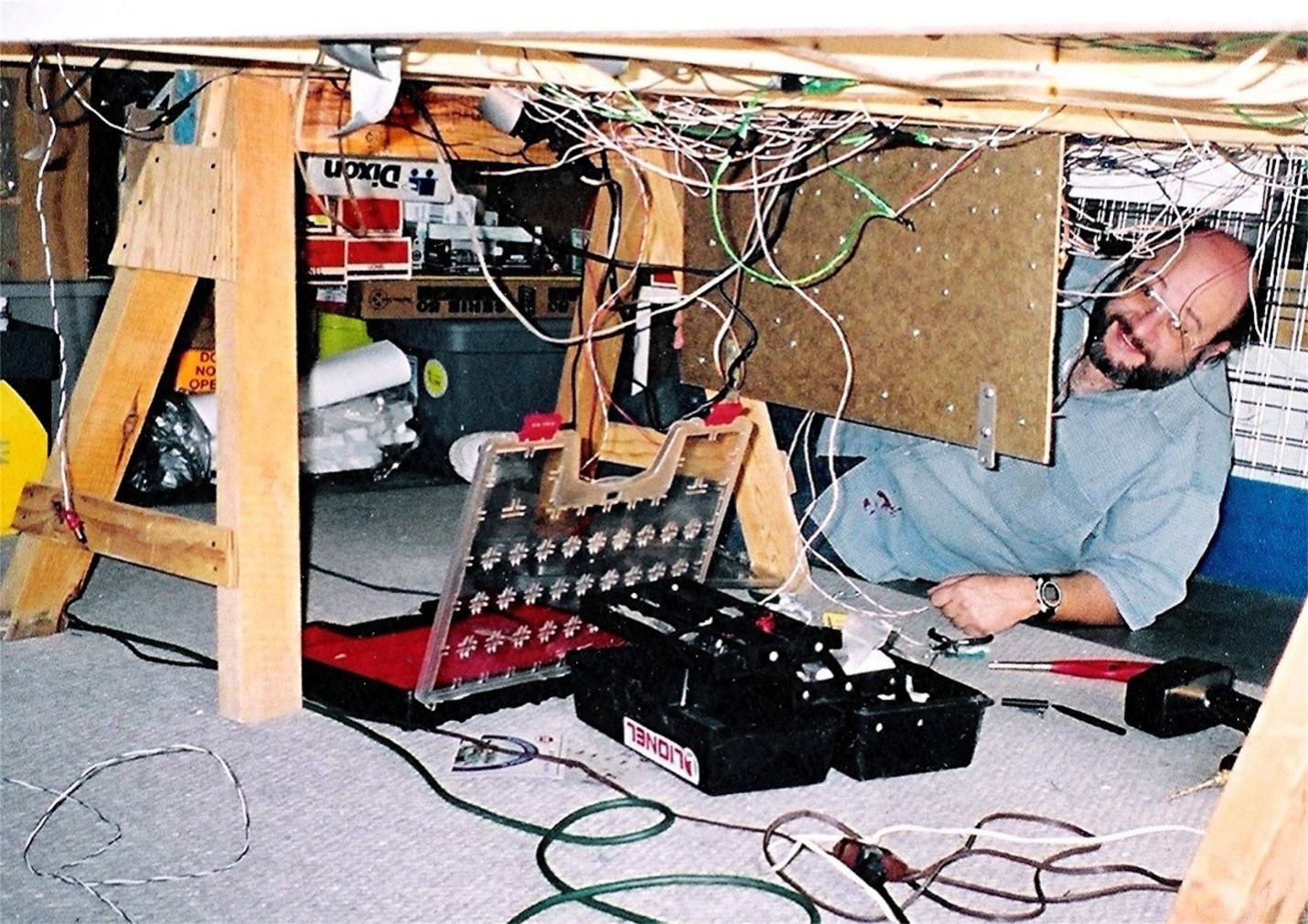 TONY P. BUILDING THE CONTROL SYSTEM FOR THE MAKE-A-WISH LAYOUT.

Unfortunately, the great success with the Make-a-Wish Foundation was followed by great loss. Soon after, Sam L. (a former NMD President), and Jim S. passed away. Losing Sam was bad enough, but Jim had been the “heart” of the division for many years. He was one of those few “indispensable” people and his passing marked a great change in the NMD. 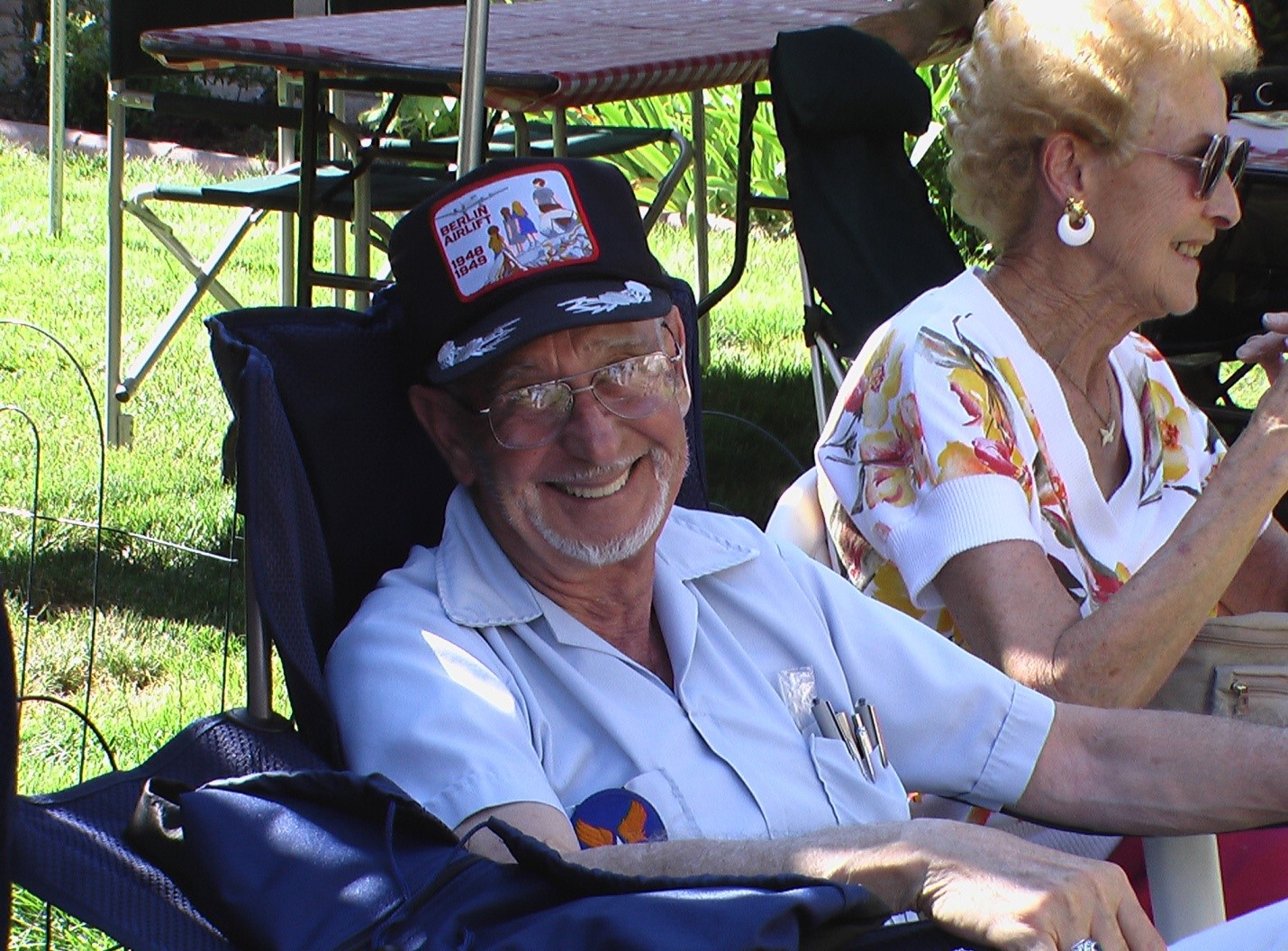 As the decade drew to a close, the NMD decided to “go for broke” in order to get children involved in toy trains. Tony P. started the “Give Your Trains Away (GYTA)” program. The objective of this program was primarily charitable – give a train set to a child who probably wouldn’t get one any other way. Donations of old rolling stock and track were collected from members. These were fixed and cleaned and used to make up train sets that would be given away at the swap meets and module displays. The program went on for six years and 25 sets were given away. 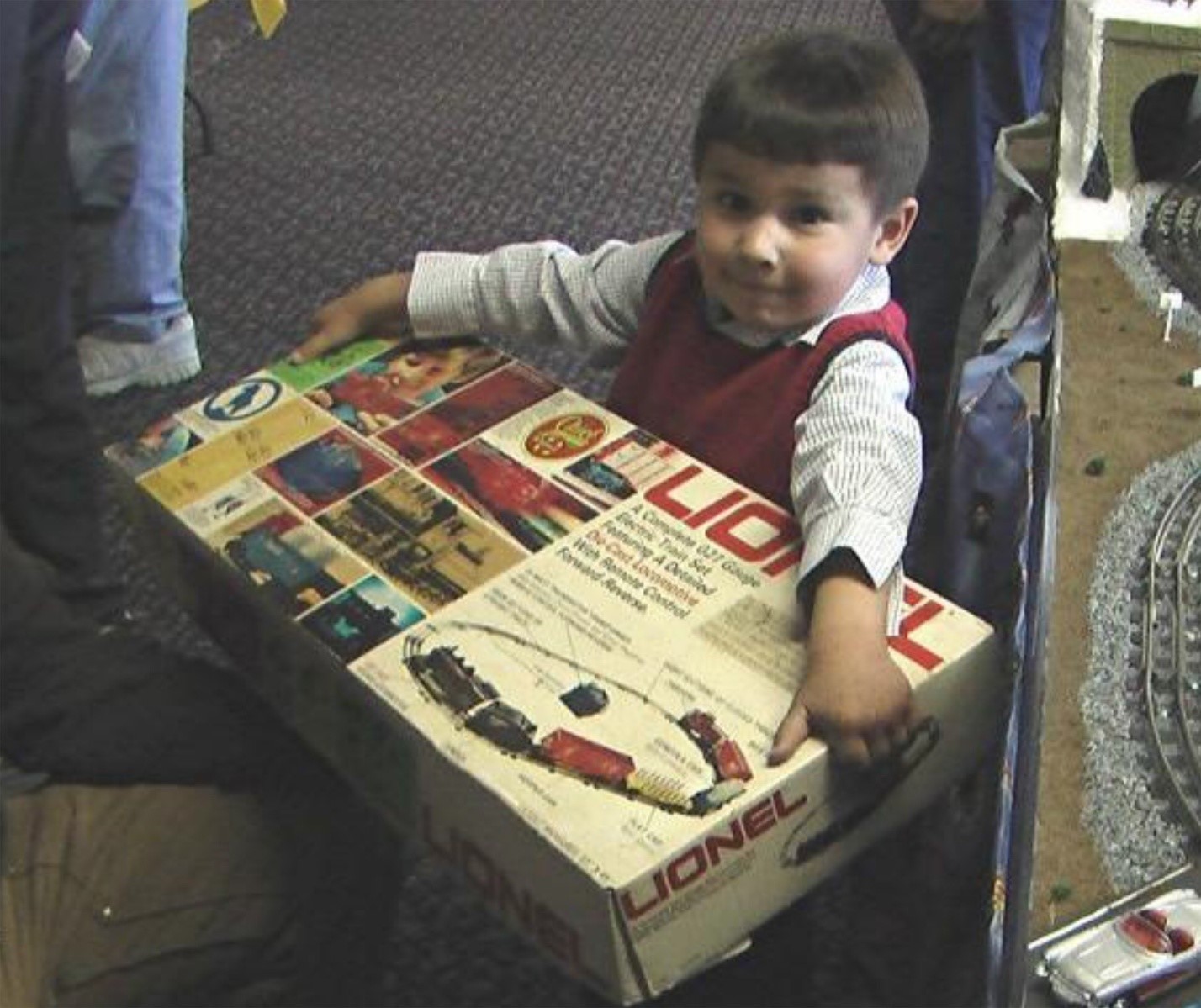 A LUCKY BOY GETS A FREE TRAIN SET FROM THE GYTA PROJECT AT AN NMD SWAP MEET.

Roger A. became President in 2008. He inherited a group that was just as active as it was back in the late 1980s. There were three swap meets each year in Albuquerque and one in Socorro. The annual picnic is always a fun event and the December Swap Meet was followed by a Pot Luck with a huge raffle. The modules continued to be on display at various locations around the city like The Albuquerque Rail Fair and National Train Day. In 2009, Tony P. took over as editor of the NMD newsletter (Fixed Voltage), a job he had back in 1991! 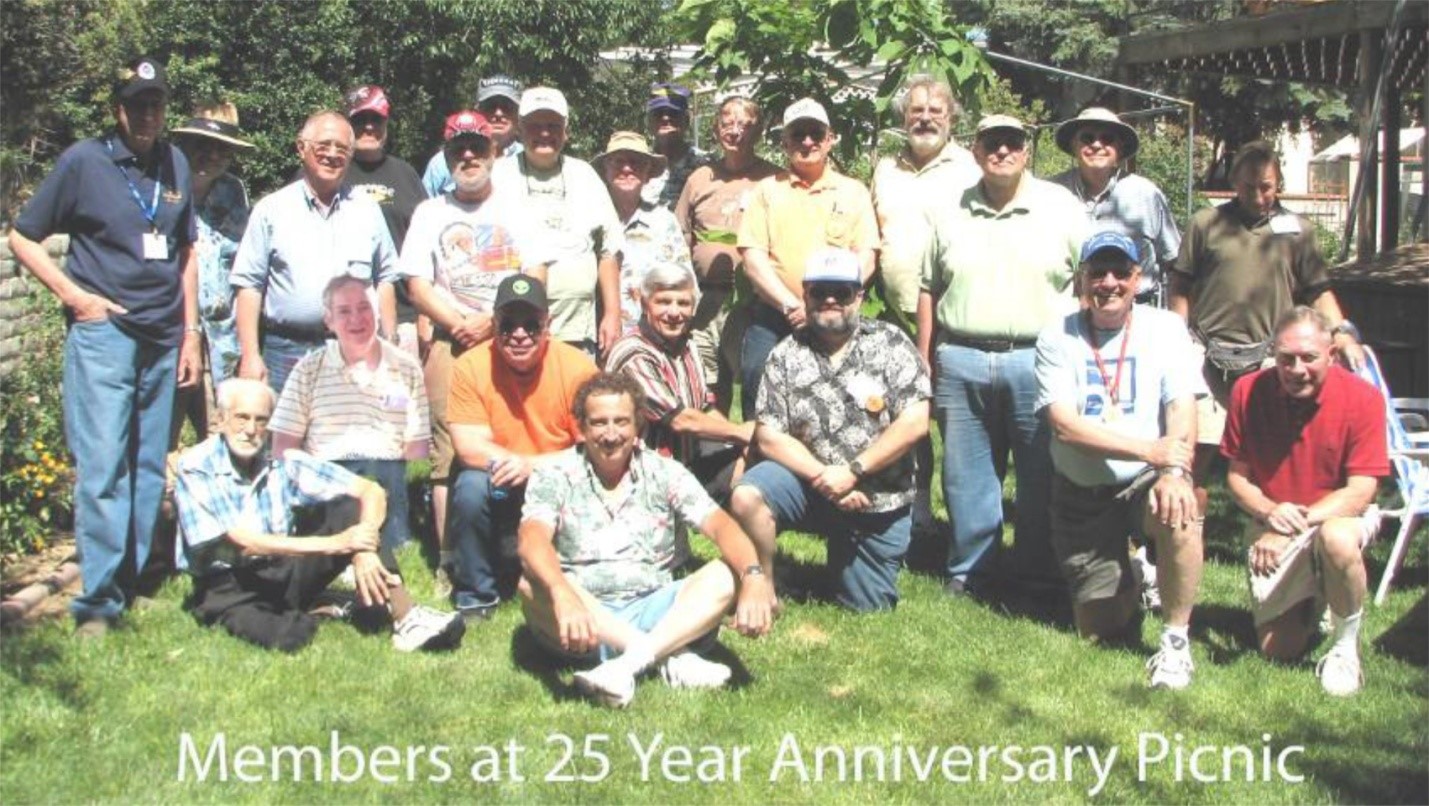 MEMBERS GATHER AT THE 2010 DIVISION PICNIC. 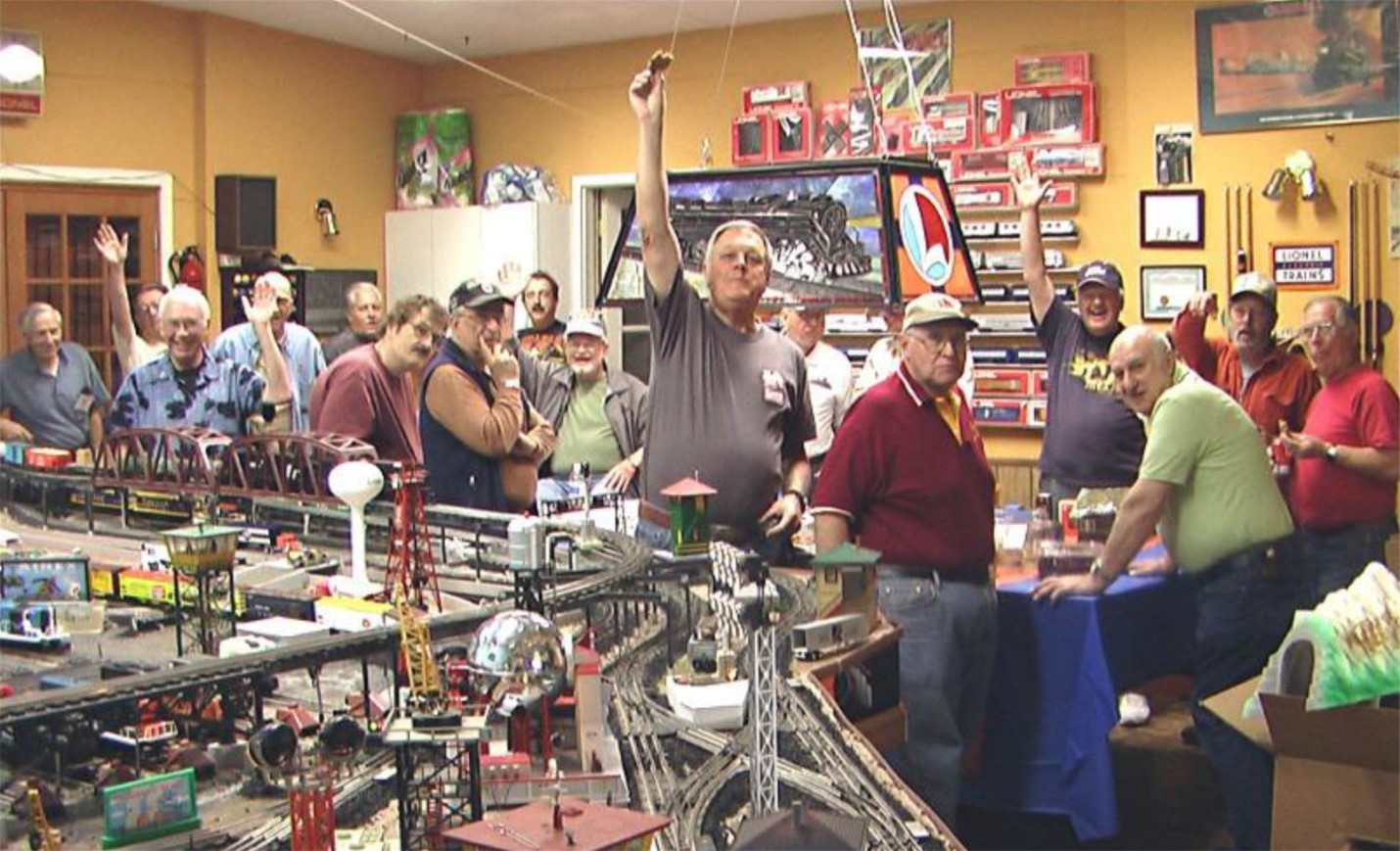 AN ACTIVE MEMBERS MEETING IN 2011.

In the last few years, the NMD, under President Tony P., has continued to be an active group of TTOS members. We are proud to help sponsor the National Convention in August 2015 and will do our best to make sure the event is memorable for all you who come to visit us in Albuquerque. We know that you’ll enjoy the tours and we will do our best to impress you with our local layouts. ALL ABOARD FOR ALBUQUERQUE – WE’LL SEE YOU IN AUGUST!

THE NEW MEXICO DIVISION STARTS ITS FOURTH DECADE…STILL HAVING FUN AND NEW MEMBERS ARE ALWAYS WELCOME!